Hotel infantas is a clean hotel in a great location in central Madrid. It may be a bit more three star than four star as it’s advertised, but will work great for most travelers.  Plus, it’s a great value, especially if you’re not spending much time in your room.

Location: Hotel infantas is located just a block or two off of Gran Via, one of the most famous streets in Madrid. Almost everything you can see in central Madrid is less than 10-20minutes walk from the hotel. Some great restaurants and bars are just steps away eliminating the need for taxis or taking the metro.  It has a corner location in a trendy neighborhood with considerable nightlife.  Noise can be a factor here, no matter what floor you’re on.  Two metro stops are within a five minute walk giving you easy access to the rest of Madrid. 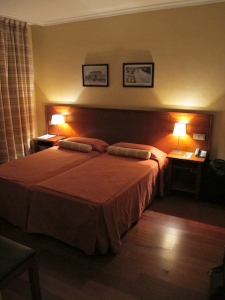 Rooms: Rooms are fairly well appointed, clean and have plenty of storage space. Infantas is in a typically old European style building, so most rooms have double, floor-to ceiling narrow doors that open out onto the street below. Luckily, there are two sets in most rooms to cut down on outside noise, but noise can still be an issue. The neighboorhood of the hotel has a significant night life,  so noise on the streets can last well past the early morning hours. You may want to consider an inner-courtyard room, however, book early as there aren’t many in this hotel.  Bathrooms are also good sized for European standards and some include tubs a well as showers. There’s plenty of storage For your gear as well as safes in each room to store your valuables. 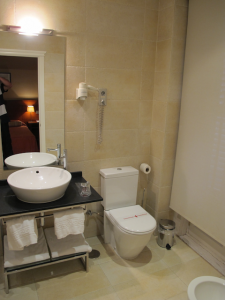 Facilities: The hotel has a small bar and separate small restaurant. Each morning, breakfast is served in the restaurant and consists of a small buffet with hot and cold items, including eggs made to order. Food selection changed slightly each day which was nice. We didn’t eat here for dinner, however, the restaurant appeared to be quite popular.  Free wi-fi is offered throughout the hotel, but the signal is very weak in most areas, including the lobby.  If you need fast internet access, you’re best bet is Starbucks across the street. 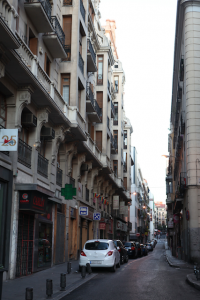 Staff: Service at the hotel was very good. Front desk personnel were very familiar with the neighborhood and we able to make recommendations and suggestions for most places in central Madrid.

Pros: Clean rooms in a great part of the city.  Lots of things close by and within easy walking distance.  Great value for the money.

Cons: Street noise can be an issue, even though it’s not on a busy street.  A/C doesn’t work all that well in rooms and Wi-Fi signals are weak in all spots of the hotel.

[box type=”info” ]Book an interior room if possible, to have a quiet nights sleep. Street noise here can be quite loud throughout the night.[/box]
Tags: chuecahotel reviewmadridspain
Leave a comment