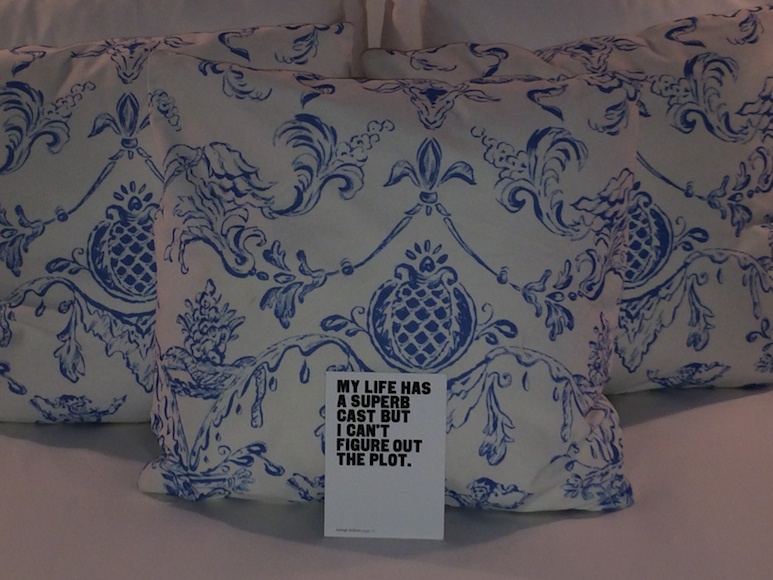 When we come to New York, we spend a majority of our time in SOHO, East and West Village, Tribeca or the Lower East Side. We’ve stayed many different places, but the Mondrian SOHO is the perfect location if you’re planning on spending time in any of these areas.

Location:
The Mondrian sits on Crosby Street which is a relatively quiet street. If that’s possible in NYC. As you approach the hotel, it’s impossible to miss as it has a large greenery covered arched walkway at it’s entrance. It seems like thousands of people stop here everyday to get their photo taken in front of it.  Check in is actually on the second floor, above the bar.  It’s accessed by either elevator or stairs.  Doorman service is primarily on the Crosby Street side of the hotel, although you can also enter on Lafayette.

It’s an easy walk to anywhere in SOHO and Chinatown from here, as well as to the East or West Village.  Within a block or two, there’s great restaurants, bars and shopping.

Rooms:
Rooms here face either Crosby Street or Lafayette Street which is on the opposite side of the hotel. Rooms on the Lafayette Street side tend to be quieter as there’s less traffic and the hotel sits further off the street. There are only about 12 rooms per floor, so traffic in the halls is somewhat limited.

We stayed in a one bedroom suite. Rooms at the Mondrian are typical NYC sized, so don’t expect a lot of space. But of course you’re in New York, so who spends any time in their rooms anyway? Bathrooms are on the small side, but the shower has ample room and large windows. No tubs in most rooms here. Sinks sit outside the bathroom area. The one bedrooms suite has a small sitting area with decent sized sectional that’s mostly separated from the sleeping area. There’s a small closet, with just enough room to get around both sides of a king bed.  You gotta love blue, because that’s the theme at the Mondrian SOHO, but it’s tastefully done.  Rooms are well furnished.

Facilities & Service:
The service here was very good.  We had a sink issue in the bathroom that took a couple of calls to resolve, but it did get resolved.  There’s a separate concierge desk for local information.  Housekeeping did a great job of keeping the room spotless and at leaving extra towels when asked.

The beautiful glass covered restaurant sits on the first floor in front of the hotel.  Resembling a large greenhouse, it’s chandeliers and front patio are exceptional.  We dined in for breakfast one morning and the food and service were great.  The breakfast menu is a bit short on selection, but you’ll easily find something that fits your needs.  There’s a crude and cocktail bar on the first level as well, where we had very good drinks and appetizers.  We didn’t get a chance to check out the rooftop bar, but we will on the next trip.

Pros: Location and comfy rooms are the hallmark of the Mondrian SOHO.

Cons:  You will spend a bit more here, but it’s the location that makes this an easy choice.

by me June 28, 2011
Show CommentsClose Comments