On Our Way Back!

We’ve let the website go by the wayside the last couple of years, but we’re on our way back!

COVID has greatly interrupted our travel (as we know it has for lots of others, too!), so we’re working to get the website updated over the next few Fall and Winter months. It will be a longer than I’d like process, but we’ve already started with a new look.

Things are going to take a while, so some links may break here and there. We’ll also be updating some of the old existing posts and taking a fresh look at how to streamline the content. You can expect easier navigation, more concise information and lots of detailed maps of where we’ve been that you can use on your next trip (whenever travel restarts again….which is hopefully damn soon).

In the interim, follow us on Instagram @itsallherecom. We’re posting almost daily over there till this gets back up and on it’s feet.

We’ve had the opportunity to fly the Boeing 787-8 airplane from on United’s DEN-NRT route a couple of times over the past year.  Being a passenger in this plane makes for a great flight experience.  Lower cabin pressure means less jet lag.  Larger windows and better luggage bins mean a lighter, airier cabin.   It’s just a much better flying experience.

Now with the new Boeing 787-9, a larger version able to carry more passengers, the bar is set even higher.  Here’s a video of the new Boeing 787-9 performing “out of the ordinary” maneuvers while practicing for the Farnborough UK airshow.  It’s pretty spectacular to see this large of plane, be able to do these things so easily.  Enjoy. 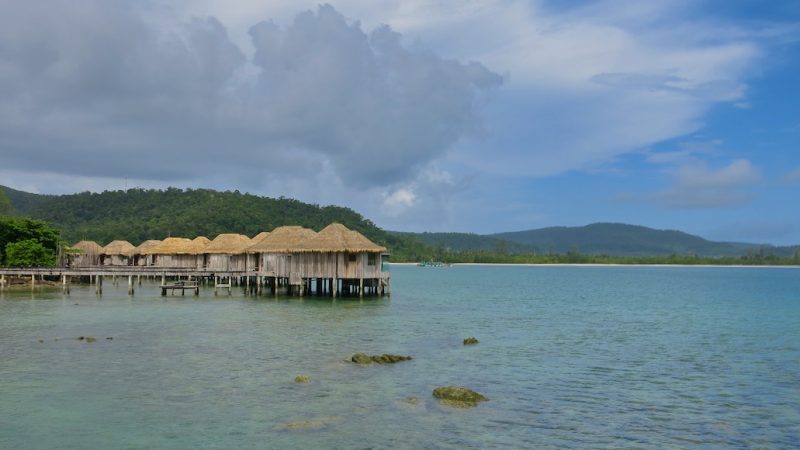 We’re back from our quick trip to southern Cambodia.  Even though rainy season is in full swing, our trip to Koh Rong was a success.  We’ll have photos, video and more coming later in the week. 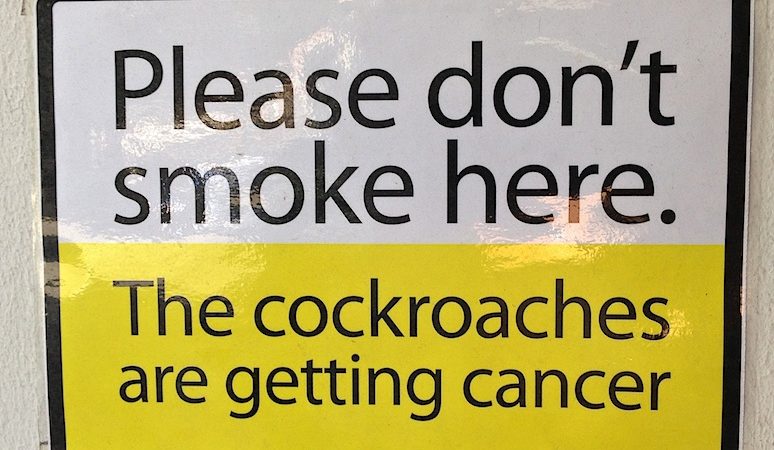 A new twist on a no smoking sign from Singapore. 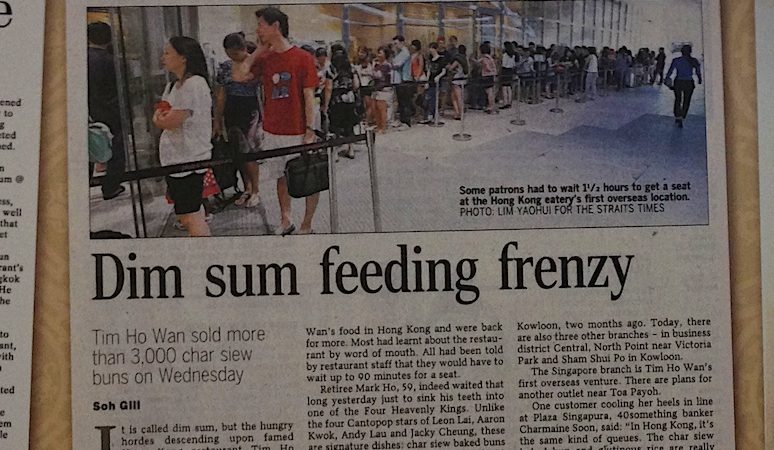 Tim Ho Wan has various locations in Hong Kong, Singapore and now Manilla.  The non-Hong Kong locations are franchised.  Follow the links above for a Tim Ho Wan near you.

You won’t walk right into to a Tim Ho Wan. You’ll wait. And wait. We were fortunate enough one afternoon, to get in in less than 10 minutes. But most of the time, you’ll wait 30 minutes. 60 minutes. Maybe more. There are no reservations. The good news is the line moves rather quickly and they don’t let people linger over their food.  On some days if you go at extremely non-peak times, you may be able to walk right in, but I wouldn’t bet on it.

Service is fast. Servers bring things out as they’re ready, to keep you eating and keep you moving. Ordering is just like sushi. You fill you’re order out on a piece of paper. With the places always packed, seating can be cramped. They try to pack in as many as they can, so the atmosphere reminds you of fast food.  This is not fine dining, even though they’ve won a Michelin star.

Tim Ho Wan. There’s only three other words beyond that that you need to know.. Pineapple Pork Buns.

Tim Ho Wan has 28 dim sum dishes, but what got Tim Ho Wan their Michelin star were the BBQ pork buns. Phenomenally good. Sweet and salty exterior filled with char siu pork. It’s hard to eat just one order, but that’s what you’ll be relegated to at most locations.  The BBQ pork buns are just one of the Big 4 Heavenly Kings which also includes Steamed Egg Cake, Vermicelli Roll with Pig’s Liver and Pan Fried Carrot Cake.

Prices are moderate and you definitely get what you pay for. But those BBQ Pork Buns, they’re pretty much worth anything you want to pay. 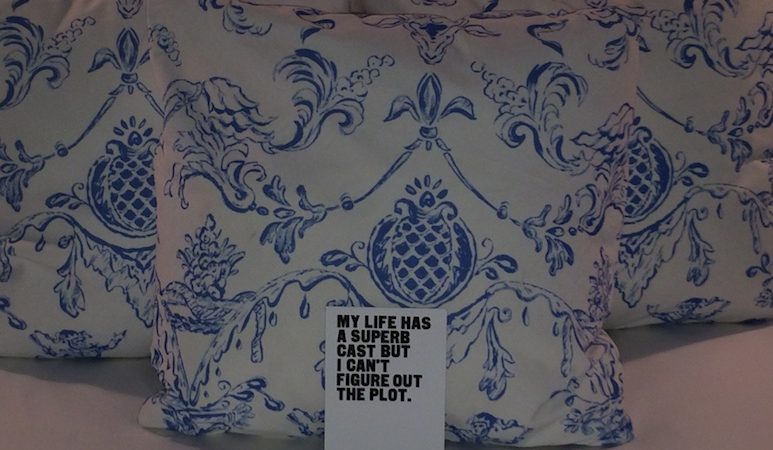 When we come to New York, we spend a majority of our time in SOHO, East and West Village, Tribeca or the Lower East Side. We’ve stayed many different places, but the Mondrian SOHO is the perfect location if you’re planning on spending time in any of these areas.

Location:
The Mondrian sits on Crosby Street which is a relatively quiet street. If that’s possible in NYC. As you approach the hotel, it’s impossible to miss as it has a large greenery covered arched walkway at it’s entrance. It seems like thousands of people stop here everyday to get their photo taken in front of it.  Check in is actually on the second floor, above the bar.  It’s accessed by either elevator or stairs.  Doorman service is primarily on the Crosby Street side of the hotel, although you can also enter on Lafayette.

It’s an easy walk to anywhere in SOHO and Chinatown from here, as well as to the East or West Village.  Within a block or two, there’s great restaurants, bars and shopping.

Rooms:
Rooms here face either Crosby Street or Lafayette Street which is on the opposite side of the hotel. Rooms on the Lafayette Street side tend to be quieter as there’s less traffic and the hotel sits further off the street. There are only about 12 rooms per floor, so traffic in the halls is somewhat limited.

We stayed in a one bedroom suite. Rooms at the Mondrian are typical NYC sized, so don’t expect a lot of space. But of course you’re in New York, so who spends any time in their rooms anyway? Bathrooms are on the small side, but the shower has ample room and large windows. No tubs in most rooms here. Sinks sit outside the bathroom area. The one bedrooms suite has a small sitting area with decent sized sectional that’s mostly separated from the sleeping area. There’s a small closet, with just enough room to get around both sides of a king bed.  You gotta love blue, because that’s the theme at the Mondrian SOHO, but it’s tastefully done.  Rooms are well furnished.

Facilities & Service:
The service here was very good.  We had a sink issue in the bathroom that took a couple of calls to resolve, but it did get resolved.  There’s a separate concierge desk for local information.  Housekeeping did a great job of keeping the room spotless and at leaving extra towels when asked.

The beautiful glass covered restaurant sits on the first floor in front of the hotel.  Resembling a large greenhouse, it’s chandeliers and front patio are exceptional.  We dined in for breakfast one morning and the food and service were great.  The breakfast menu is a bit short on selection, but you’ll easily find something that fits your needs.  There’s a crude and cocktail bar on the first level as well, where we had very good drinks and appetizers.  We didn’t get a chance to check out the rooftop bar, but we will on the next trip.

Pros: Location and comfy rooms are the hallmark of the Mondrian SOHO.

Cons:  You will spend a bit more here, but it’s the location that makes this an easy choice. 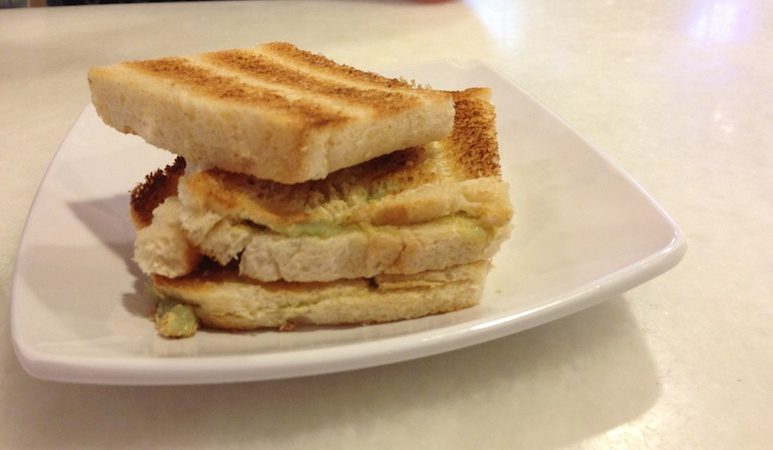 If you’re a fan of coconut, then you’ll love Kaya toast.

Kaya toast is a snack found primarily in Singapore and Malaysia.  A breakfast staple, but also great as a snack anytime of day, Kaya toast is thin brown toast with a thick coconut jam (kaya, that’s made with sugar, coconut, coconut milk, eggs and pandan) and then a thick slab of butter.  You can also have it with a soft egg, but we’re purists and prefer it with out.  This stuff is so yummy and costs less than $2 USD. 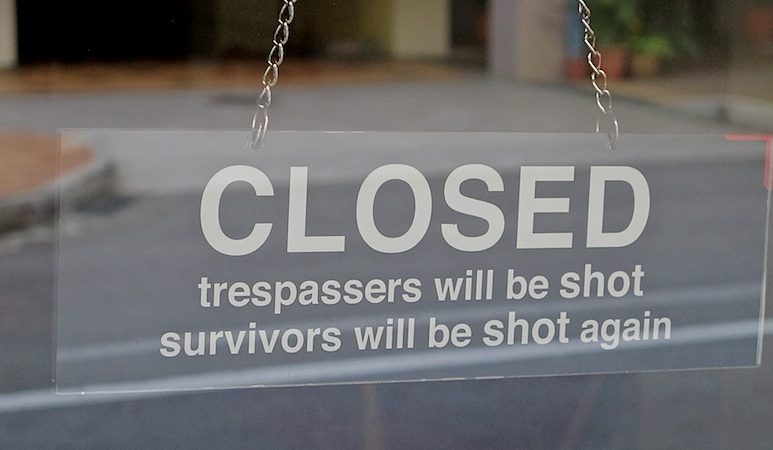 We’ve seen iterations of this before, but it’s still a great sign.  We saw this in Singapore. 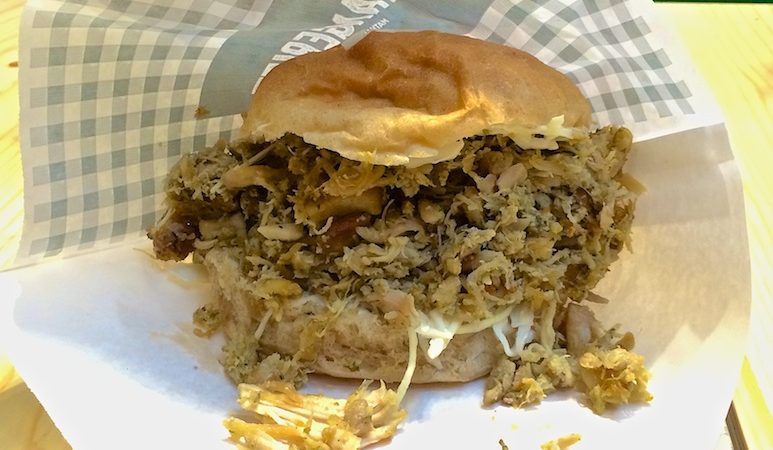 Location
Stangeriet is located on the perimeter of the central seating area in the Mathallen, in the Grunnerloka neighborhood of Oslo.

Food
Stangeriet is chicken and chicken done right and just about any way you want it. While you can get your basic chicken parts fried or roasted, they also have a phenomenal chicken sandwhich. It’s not just a simple chicken breast, but a finely shredded chicken with special seasoning that really sets it apart. Served on a large, airy bun, with just a small dab of coleslaw, it was fantastic. These sandwhiches are definitely enough for two to share, unless you’re ravenously hungry.

Stangeriet chickens are raised on grain, without any antibiotics or hormones.  They’re also given plenty of space and allowed to grow in age far beyond the time that normal commercial chickens are grown, giving them exceptional flavor, taste and size.

The only bad thing about this place is that with large portions, you won’t have much appetite left to eat anywhere else.  But the good news is, that means you can always come back later. 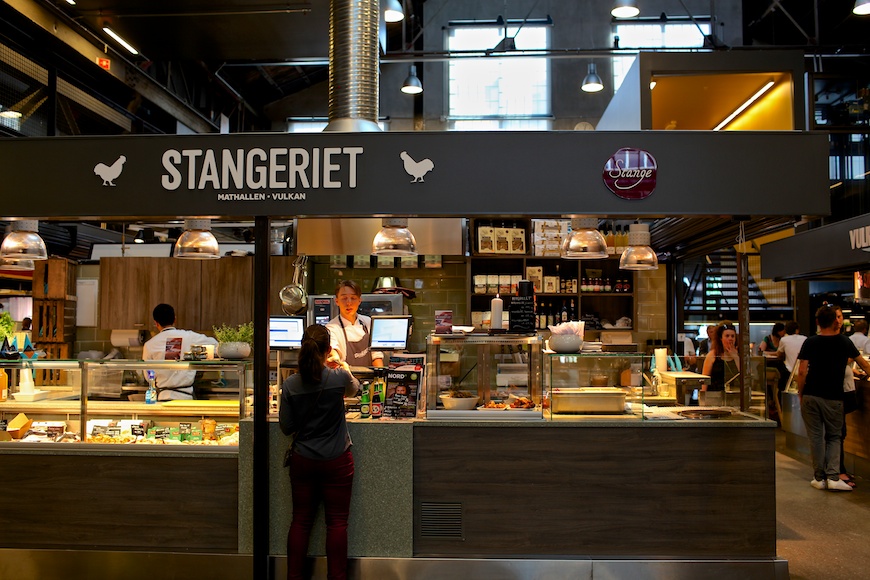 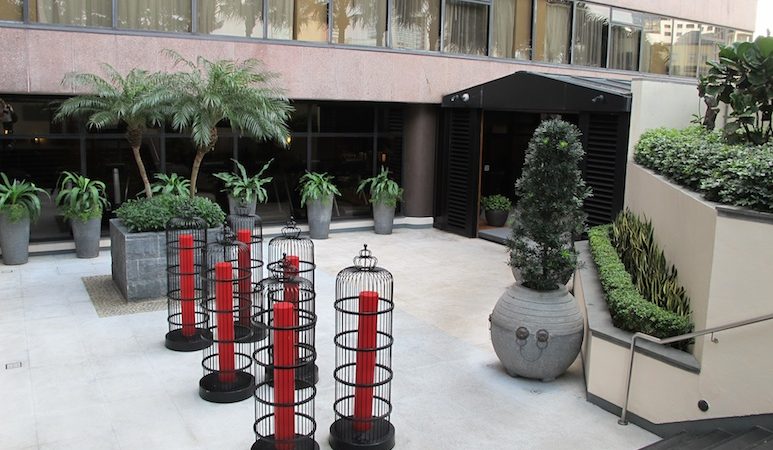 The Intercontinental Hong Kong Spa has a great location on the Kowloon side of Hong Kong and has top-notch facilities.

Treatments
We had arranged for a 3 and 1/2 hour treatment, that included a 90 minute massage, scrub of the season and 30 minutes mineral bath, plus lunch by the pool. The lunch was prepared from a special spa menu. You were able to sit in a secluded area of the pool where you could look out across the harbour to the skyline of Hong Kong.  Other treatments at the spa are typical of most, but include many with an Asian wellness theme.  Our treatments were in a granite spa suite, that included a jacuzzi, sauna and steam shower, as well as massage table.  Very nice, comfortable and quiet.

Facilities
As you enter the Intercontinental Hong Kong Spa, there’s a large reception area and well equipped exercise area as you enter. Walls of glass overlook the large pool area. Changing areas and locker rooms are nice sized. Treatment rooms are separate from the spa entrance. As you leave reception, you walk outside to a separate building that’s just steps away. From the moment you enter, it’s like being in a whole different world. It’s super quiet, with treatment rooms along a dimly candle lit corridor.

The outdoor pool was large and they have a unique outdoor whirlpool. It’s a two level whirlpool. At the top, you have a large whirlpool separated by glass. One side is very hot and the other side ice cold. Both spill over into a moderate temperature pool below.  You have phenomenal views of Kowloon Bay and Hong Kong.

Pricing
Pricing is comparable to most premium spa in Hong Kong.  Expect to pay $200 USD and up for a regular treatment, with packages approaching $500 USD or more.